I just wanted to update folks on the new “Fly Fish TV with Kelly Galloup” Subscription Series that is now available for streaming and downloading.   They are one hour episodes and I have edited three of the six that you get in the package for just $30 through Kelly’s Slide Inn website.  All six should be available in about a month and a half so you can binge on Galloup to your hearts content, if you have that kind of endurance.

Had my doubts if we could add enough value into the productions to make them worthwhile for subscribers, but now that I am well into making them I am pretty sure even the hard core fly angler can get their money’s worth out of the package.  Kelly and his crusty angling companions are providing plenty of tips and demonstrations so that even the experienced fly fisher can find some gems of wisdom that might improve their catch.  An if you haven’t bought the Fly Fish TV “How To” Video “High Sticking and Reading Water” you won’t have to, since six significant parts of it are included in the series.

It has been a very liberating experience for me, doing hours for the web instead of twenty-two minute shows for TV.  I am now able to let Kelly and his cast of characters fully explain what they’re up to and let the angling adventures play out completely.  I am free to do what it is that I like most, which is to just make instructional and entertaining fishing adventures to my heart’s content. And since Kelly’s “K G Ventures” is the actual producer (double-speak for paying the bills) I don’t have to fret about networks, advertisers, and a myriad of details that often sapped some of the energy I would have otherwise put into the editing process.
I will give you some of my insights on the three shows I have edited so far.

“Streamer Wading” was shot in Kelly’s back yard on the Madison River and Johnny McClure of the Slide Inn is our guide.  Since we had been accused of doing too much of Kelly’s stuff from a boat this was a strictly wading adventure.  After completion Kelly and I are both pretty sure it is a better job of explaining some wade fishing techniques than we did in either “Streamer Fishing for Trophy Trout” or the advanced version.  A lot here on how to approach and fish a variety of runs with streamers.

“Henry’s Fork Hatch” is a spring salmon fly adventure with guide Doug Pauline.  Doug is as lose a cannon  as Kelly and these angling buddies do their best to explain this famed hatch, and show you how to chase the bugs and bows that eat them.  It is an exciting adventure on one of the wilder and more scenic sections of the Henry’s Fork, and you get plenty of close up looks at these giant bugs and the flies that imitate them.

“Hardly, Strictly Musky” profiles an annual Tennessee tournament that gathers a Southern crowd of musky fly fishing addicts.  Guide Charlie Gordon teams with Kelly in the competition, and together they do a great job of demonstrating angling techniques.  It will give you a good grasp of the skills you need to master if you are going to give this demanding species a try.

Still to be edited are streamer fishing episodes on The Blackfoot and Missouri Rivers, and a lake fishing show on Mission Lake outside of Glacier National Park in Montana.  I’ll update you on those when I see what I can make from the footage already in the can.   I encourage you to take Kelly up on this first subscription offer of Fly Fish TV,  partly because I think you will enjoy it and partly because I want it to work so we can shoot some more episodes this year. 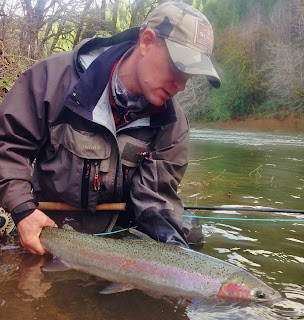 I have hooked up with friend and expert spey guide and angler Rob Crandall of Watertime Outfitters to work on a new spey cold water steelhead  fishing video.  We have been shooting hard on a number of great Northwest Rivers with some great Northwest guides.  We already have more than I possibly could fit in one video and are still shooting so I am going to have to update you further when the exact content and plan come into focus.  I do know by the time we get done we will have more detailed tips and demonstrations of how to get a swung fly deep than one might ever need.  But so it goes.